In 1992, Professors Per Gårder and John Alexander initiated the first academic research in the United States on the effectiveness of shoulder rumble strips.  They found that fatigue-related accidents, especially when the driver has actually dozed off, constitute a serious safety problem. Among 205 drivers surveyed in Maine, 31% had dozed off at least once while driving during the preceding twelve months. Fifteen of these drivers had had a collision as a result of dozing off. The survey also shows that younger drivers are especially prone to doze off, and that men are twice as likely as women to doze off. The average incident rate for our random drivers is around once every 45,000 km (28,000 miles). Almost 50% of the most serious incidents took place on 2-lane roads.

The first rumble strips in Maine were installed in 1994 and the Maine Department of Transportation (Maine DOT) and the Maine Turnpike Authority (MTA)  have now installed Continuous Shoulder Rumble Strips (CSRS) on almost all of their rural sections of the Interstate and Turnpike system.  A 2005 evaluation of the effectiveness of CSRS shows that they reduced sleep-related run-off-road crashes by approximately 58%. Fatal crashes were reduced to a higher degree than other crashes.  Dry-road, run-off-road crashes were reduced by about 43% giving a benefit/cost ratio of installing CSRS on a typical Maine section to be at least 130.  This is a higher B/C-ratio than that of any other highway safety improvement.  You can read more about this in: Per Gårder, Michael Davies, “Safety Effect of Continuous Shoulder Rumble Strips on Rural Interstates in Maine,” Transportation Research Records Number 1953, pp 56-162, Washington D.C., November 2006. 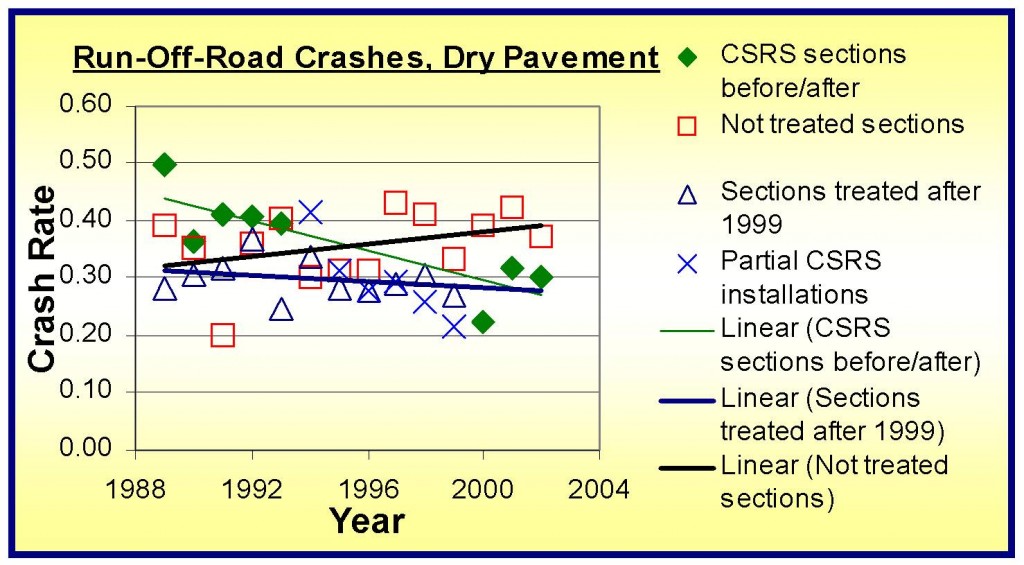 In 2004, Dr Gårder presented the report “Traffic Signal Safety—Analysis of Red-Light Running in Maine.”  The aim of that report was to suggest how to make signalized intersections safer, in particular in respect to crashes caused by red-light violations.  The report includes a review of literature, analysis of crashes, and interviews with Maine drivers.  One conclusion is that the drivers are completely unaware that there was a red light in about a quarter of the crashes caused by red-light running violations.  One way of improving the safety of the location may be to replace it with a modern roundabout.  Another conclusion is that signalized intersections should be vehicle actuated if possible or else coordinated with nearby signals.  More enforcement by police or automatic surveillance is by the public considered the most effective ways to reduce red-light running.  Finally, the most important factor in reducing red-light running frequency, as well as the number of serious crashes caused by red-light running, is never having a posted speed limit greater than 35 mph through a signalized intersection.

The 2005 study, “Traffic Safety Studies Before and After Introduction of Red-light Running Photo Enforcement in Lewiston and Auburn, Maine” concluded that red-light running is a major safety concern in Maine.  It can probably best be reduced by enforcement.  This study uses crash data, traffic conflict data, video and field observations of behavior to evaluate the potential effectiveness of photo enforcement in Lewiston and Auburn in Maine.  The intent of the pilot study was to demonstrate the need for photo enforcement, to show that it can work in Maine, and to help the legislators make informed, educated decisions on legislation affecting this program, which may include a shift in policy to allow photo-enforcement activities.  The ultimate purpose of the activity is to improve safety at intersections, thereby reducing fatalities and injuries.

A multitude of reasons meant that the system was not operating 100% of the time.  Still, it was shown that automatic enforcement can be used even during Maine’s severe winter conditions and with a careful maintenance program, the effectiveness could be further improved.  And even a system that catches only 50% of all offenders would be about 2000 times more effective than today’s enforcement level. A question that has been addressed through this study is whether automatic enforcement, using video and digital camera technology, effectively can reduce red-light running frequencies even if violations only result in warning letters.  Observations of red-light running indicate that the violation rate dropped by around 28% between December 2004 (when the system was first installed) and May 2005, when the system had been operational for several months.  But it was the infractions that occurred at low speeds and within the first second or so that were reduced in numbers.  Infractions more than 3 seconds into red and at speeds above 35 mph actually increased.  However, it is unlikely that the enforcement system in any way led to this increase in the more serious infractions.  It is possible that weather and roadway conditions explain the higher speeds during the later months.  Conflict and crash data indicate that safety was roughly unchanged between the before period and the period when the system was in operation.

Dr Gårder has since 1975 worked on designing modern, safe roundabouts, and evaluating the effect of constructing them.  When arriving to Maine in 1992, he immediately started advocating that many more intersections in Maine be converted to roundabouts.  He belonged to a core group of very few nationwide advocates of modern roundabout when only a handful had been constructed in all of the United States. 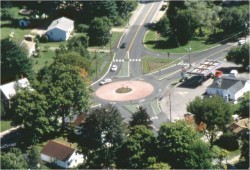 In the 1997 report to Maine Department of Transportation THE MODERN ROUNDABOUT: The Sensible Alternative for Maine, Dr. Gårder concluded that older American traffic circles can typically handle high traffic volumes but that they often have poor safety records.  Modern roundabouts are similar to traffic circles in the sense that the traffic “circles” around a central island, but most other design concepts differ.  The most important difference relates to the choice of design speed.  Modern roundabouts were first developed about thirty years ago in the United Kingdom and have since become popular around the world, in particular in Western Europe and Australia.  Their design has been refined in Scandinavia.  Their accident rates are competitive with any other lay-out and type of control including signalization and grade separation.  Injury rates are considerably lower than that of signalized intersections.

The first modern roundabout in Maine was built in Little Falls, Gorham in 1997.  Dr Gårder early evaluation of that roundabout showed that it worked well safetywide and that the one-lane design will be able to handle traffic growth for years to come. He also concluded that delay on the minor approaches had been reduced by approximately 80% during morning and afternoon peak hours. In total, the reconstruction saves 5,000 to 10,000 hours of travel time annually. This by itself pays for the construction in about five years. A safety evaluation after 54 months of operations showed that injury crashes had been more or less eliminated and the overall crash rate had been cut by over 50% to 0.62 per million entering vehicles.

A few years later, when over 20 modern roundabouts in the United States had been operating long enough to be evaluated, a safety evaluation was done by Dr Gårder and three other researchers.  This landmark study, which was conducted for the Insurance institute for Highway Safety is published in their Status Report, Volume 35, No. 5, May 13, 2000, which is available at http://www.iihs.org/sr/pdfs/sr3505.pdf .  A quote from that report reads: “Researchers at Ryerson Polytechnic University, the Institute, and the University of Maine studied crashes and injuries at 24 intersections before and after construction of roundabouts. The study found a 39 percent overall decrease in crashes and a 76 percent decrease in injury-producing crashes. Collisions involving fatal or incapacitating injuries fell as much as 90 percent. These findings are consistent with those from other countries where roundabouts have been used extensively for decades.”